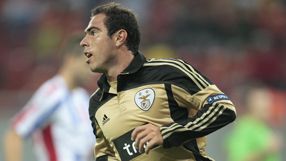 He calmly slotted what turned out to be the winner five minutes before the interval although the Portuguese side were guilty of not finishing off their opponents and were nearly made to suffer in the final minutes.

"We were strong in terms of ball possession and commanded the match," coach Jorge Jesus said.

"Otelul created very few chances and only scared us close to the 90 minutes. When a team is winning by just 1-0 they are always subject to conceding a draw at the end in a counter or a rebound."

The visitors, who reigned supreme in Europe in 1961 and 1962, took the initiative from the first whistle as they displayed the confidence of a team unbeaten in 12 matches in all competitions this season.

Lively Bruno Cesar nearly opened the scoring but his thunderous shot from the edge of the penalty area went just wide after Otelul's defence failed to clear a long throw-in.

The Brazilian, however, gave keeper Branko Grahovac no chance when he finished cooly with Argentine Nicolas Gaitan the provider.

Benfica, who drew 1-1 against Manchester United in their opening match, continued to press forward in the second half with Grahovac denying Javier Saviola and in-form Paraguay striker Oskar Cardozo.

Romanian champions Otelul, seeking their first Champions League point, were toothless in attack, hardly challenging opposing goalkeeper Artur, who only had to parry a rasping long-range shot from Ioan Filip after the break.

"We could have killed the game before and all that late suffering was unnecessary," said goal scorer Bruno Cesar.

The home side, who have not conceded a goal in any of their last three European home games, could have snatched a point in the dying minutes but defender Milan Perendija missed the target with a shot from in front of goal.

"Defeat is defeat, I can't be satisfied because we have made a lot of mistakes and at this level that is not allowed," Otelul coach Dorinel Munteanu, Romania's most capped international, told local state television TVR.

"We are not in the same shape we were last year for various reasons. Today we lacked courage," he added.