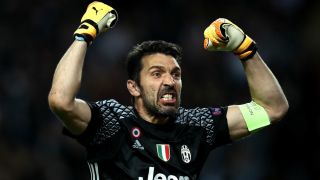 Juve beat Monaco 2-0 away from home on Wednesday in the first leg of their semi-final tie to take a huge step towards the final in Cardiff.

Gonzalo Higuain's double did the damage for Massimiliano Allegri's men, but the players at the other end of the pitch also played a huge part in their victory, keeping out a Monaco side who had scored 12 goals in four knockout games coming into the tie.

Juve have now shutout their opponents for six straight games in the competition for the first time in their history.

The run has seen them keep out Dinamo Zagreb in their last group game before denying Porto home and away in the last 16, before preventing Barcelona from scoring in both legs of the quarter-final prior to the match in Monaco.

6 - Juventus have kept 6 consecutive clean sheets for the first time in their Champions League history. Wall. May 3, 2017

In total, Juve have only conceded twice in 11 Champions League matches in 2016-17.

This game was also the first time Monaco had failed to score in a match at Stade Louis II since November 2015.