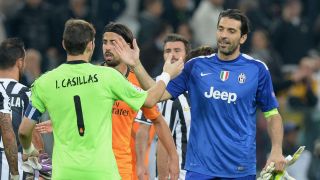 Juventus captain Gianluigi Buffon is hopeful he and Porto's Iker Casillas can both perform well as they go head-to-head in the Champions League on Wednesday.

The two iconic European goalkeepers share a great deal of mutual respect, with Buffon praising his opposite number ahead of the meeting.

The round-of-16 first leg should prove Buffon's 100th Champions League appearance for Juve, although he added that he was surprised by that statistic - as he thought he had played more.

"I was told on the plane that it's my 100th Champions League appearance [for Juve]," he told a pre-match news conference. "To be honest, my ego got a bruising, as it felt like I'd played many more.

"Iker Casillas is a colleague I have always admired and continue to admire a great deal. He took a brave and difficult decision to challenge himself [in moving to Porto from Real Madrid].

"He's in great shape and I hope we both have great performances."

And Buffon expects a tough test against Porto in the first leg, and insists that it is important Juve have no arrogance.

"There have been big improvements over the years, winning back respect and prestige in Europe, but we did that by starting every game and every round with the utmost concentration and lack of arrogance," he added.

"That's the only way I know of going as far as possible in this type of competition."