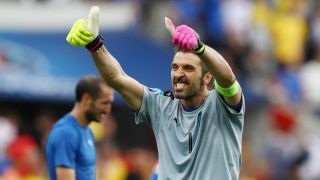 Italy captain Gianluigi Buffon insists there will be no inferiority complex when he comes up against Germany's Manuel Neuer, a goalkeeper he once described as "better than him", on Saturday.

Buffon and Neuer will be at opposite ends of the pitch when Italy take on the world champions in the Euro 2016 quarter-finals and the Juventus veteran is relishing the prospect.

"I said Neuer is better than me, because in the end it may be true," he said. "It's not something that bothers me or demeans me or what I am. I am well aware of what I have been, what I am now, and where I will be in two years. It makes me feel very calm.

"It would be offensive to compare him to a 38-year-old goalkeeper. It seems normal to give this kind of answer as, over the last four or five years, he has shown himself to be an outstanding goalkeeper in every aspect."

Buffon concedes it will be a tough test for Antonio Conte's men in Bordeaux and feels they will be "pushed to the limit".

He added: "There is no other route other than to try to keep on improving as much as possible to give ourselves the chance to go through and keep dreaming.

"When you look at the side we face we know just how difficult it will be. It's a match where there will be blood, sweat and tears and the emotional and physical aspect will be pushed to the limit but we are well aware of that and that's important going into the match."

Italy are not lacking in confidence, however.

"Of course you have belief when you are midway through a tournament, be it a World Cup or European Championship, and you have beaten Belgium, Sweden and Spain.

Buffon has twice played against Germany in semi-finals, at the World Cup in 2006 and Euro 2012, with Italy emerging victorious on both occasions. Indeed, Germany have never beaten the Azzurri at a major tournament.

Comparing those games to Saturday's encounter, he said: "There was more anxiety in 2006. It was the semis of the World Cup against the host nation and we also had the burden that we wanted to prove something to all the foreign-based Italians.

"That definitely had an impact the day before the game.

"We weren't the favourites in 2012 and we needed to come up with something special to reach the final and achieve something historic.

"As for Saturday's game, there are a number of parallels with Euro 2012, certainly on paper, and the gap could be even more significant as, since then, they have won the World Cup."