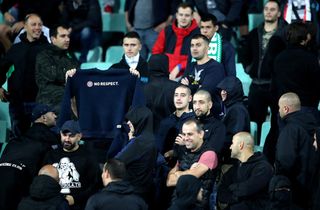 Charges against the Bulgarian Football Union include the racist behaviour, throwing of objects and disruption of a national anthem by home supporters, and showing replays on a giant screen.

The English Football Association has also been charged with disruption of a national anthem, as well as providing an insufficient number of travelling stewards.

According to a UEFA statement, the case will be dealt with by the governing body’s control, ethics and disciplinary body, with the date of the meeting yet to be confirmed.