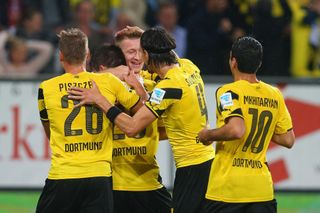 Jurgen Klopp's men slipped to a disappointing 2-0 reverse at home to Bayer Leverkusen in their Bundesliga opener last Saturday.

Last season's runners-up were far more assured in Friday's clash at the SGL Arena, although a late rally from the hosts set up a nervy finish.

Reus, who suffered the heartbreak of missing Germany's World Cup triumph last month with an ankle injury, was at his influential best throughout.

The forward combined well with Kevin Grosskreutz - who, alongside goalkeeper Roman Weidenfeller, made his first competitive start since the World Cup - to score the opener, before providing the corner for Sokratis to make it 2-0 within 15 minutes.

Substitute Ramos grabbed his first Dortmund goal 12 minutes from time, and the strike ultimately proved crucial as Augsburg hit back with late replies from Raul Bobadilla and Tim Matavz.

Dortmund fired an early warning when Lukasz Piszczek's cross from the right narrowly avoided the outstretched foot of Pierre-Emerick Aubameyang.

The opener duly arrived in the 11th minute when Reus collected the ball from deep and worked his way to the edge of the area. He then played a clever one-two with Grosskreutz before sliding a left-foot shot past Marwin Hitz.

The forward's teasing outswinging corner from the right was met by Sokratis, who leapt superbly to head into the bottom-left corner.

Augsburg showed flashes of the form that took them to eighth in the table last season, Piszczek making a particularly fine challenge to rescue Dortmund when Nikola Djurdjic was bearing down on goal.

The visitors remained largely in control, though, and Aubameyang forced Hitz into a smart low save to his left.

Djurdjic should have halved the deficit nine minutes before the break, the Serbian side-footing wide when one-on-one with Weidenfeller.

Henrikh Mkhitaryan flashed a shot wide from the edge of the box on the stroke of half-time and Dortmund's pressure continued after the restart when Erik Durm tried his luck from distance but shot wide.

Sven Bender entered the fray in the 73rd minute and earned an immediate yellow card for a poor challenge on Halil Altintop, Bobadilla putting the resulting free-kick just wide.

The game then appeared to have been sewn up in the 78th minute. Mkhitaryan's shot from the edge of the box was saved and Ramos - a replacement for Grosskreutz - was on hand to stab home the rebound.

Bobadilla gave Augsburg a glimmer of hope when he provided a deft finish over Weidenfeller five minutes later following a fine cross from Abdul Rahman Baba.

Mkhitaryan then thought he should have had a penalty when he went to ground under a challenge in the area from Ragnar Klavan, before Matavz ensured a nervy ending when he registered his first Augsburg goal with a strong front-post header from Baba's left-wing cross in the 90th minute.