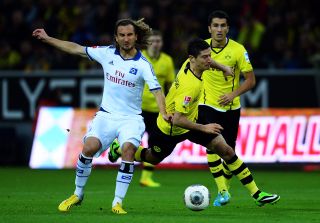 Pierre-Emerick Aubameyang and Robert Lewandowski both scored twice for the hosts, with Henrikh Mkhitaryan and the influential Marco Reus also on target.

Goals from Zhi Gin Lam and Heiko Westermann had briefly drawn Hamburg level just after half-time, but Dortmund’s dominance eventually told in a one-sided second half.

Looking to extend their 100 per cent league record , Dortmund made just one change to the side that beat Eintracht Frankfurt last time out, welcoming back Aubameyang in place of Jakub Blaszczykowski.

Despite fears that he would miss the game with a thigh strain, captain and top scorer Rafael van der Vaart was fit to lead the Hamburg attack, while the visitors also recalled former Dortmund youth team defender Lasse Sobiech.

The home side took the lead their early possession deserved on 19 minutes, Aubameyang running onto Marcel Schmelzer's long ball to fire left-footed through Rene Adler at his near post.

And they doubled their advantage just three minutes later, Armenia international Mkhitaryan coolly slotting home from the edge of the box after a back-heel from Lewandowski had set him free.

The visitors had barely threatened the Dortmund goal, but a moment of magic from Lam brought them back into the game after 26 minutes.

The midfielder skipped inside two challenges to fire home from distance into the bottom corner, giving Dortmund goalkeeper Roman Weidenfeller no chance.

Lam’s goal had been Hamburg’s only shot on target during the first half, but three minutes after the restart they drew level with just their second effort of the match.

Centre-half Westermann rose above Dortmund’s Neven Subotic to head in at the back post following a pin-point free-kick from Van der Vaart.

The home side’s pressure finally told just past the hour, when Aubameyang fired home across the goalkeeper after being played in by Mkhitaryan.

From then on, it was one-way traffic, and Lewandowski made it 4-2 on 73 minutes, slotting home from 12 yards after superb work from Reus.

Reus got on the scoresheet himself a minute later, taking advantage of a defensive mix-up to make it 5-2 before Lewandowski completed the rout on 81 minutes, heading home Nuri Sahin’s cross from six yards out.

The scoreline was tough on Adler, who made several impressive saves to keep Hamburg in touch, but he could ultimately do little as Dortmund once again took charge at the top of the Bundesliga.