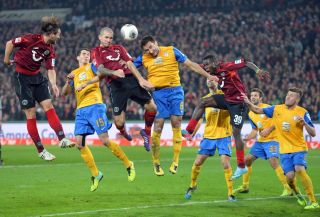 The visitors came into the game on the back of a surprising 1-0 win over third-placed Bayer Leverkusen last weekend.

And while Torsten Lieberknecht's men could not replicate the feat against their Lower Saxony rivals, they stood firm to earn a stalemate that extends Hannover's winless league run to six matches.

Hannover dominated for the majority of the first half but struggled to craft too many chances, with midfielder Edgar Prib and striker Mame Biram Diouf going closest for the hosts.

Mirko Slomka's side continued to dictate matters after the interval, but were frustrated by a determined Braunschweig defence.

Diouf wasted a good chance when headed straight at Braunschweig goalkeeper Daniel Davari from close range early in the second half, and he was left to rue his profligacy as the visitors held on for a well-earned point.