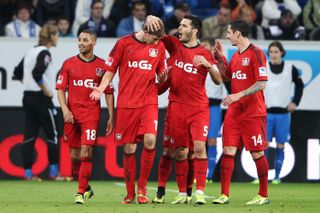 Sidney Sam had put Sami Hyypia's side into a first-half lead at the Rhein-Neckar Arena before a Kiessling header ended up in the net via a hole in the side-netting, but referee Felix Brych awarded the goal.

Sven Schipplock pulled a goal back for Hoffenheim in the closing stages, but  Leverkusen held out for the three points.

After a tentative opening, the match was sparked into life in the 26th minute when Sam cut in from the right-hand side and drove a left-footed shot into the corner beyond Koen Casteels.

Leverkusen pushed to extend their lead but were largely frustrated by some dogged home defending, until a bizarre incident with 20 minutes remaining.

Kiessling rose highest to head Gonzalo Castro's header but appeared to put the ball just wide of the goal.

However, the ball crept through a gap in the netting, with Brych seemingly deceived and the goal stood.

Hoffenheim were rightly aggrieved by the incident and pushed hard to find a way back into the game.

And they found a consolation with two minutes remaining thanks to Schipplock's effort, but could not force an equaliser.

The result means Leverkusen sit at the summit of the Bundesliga standings, with Bayern Munich and Borussia Dortmund due to play on Saturday, while Hoffenheim remain 10th.