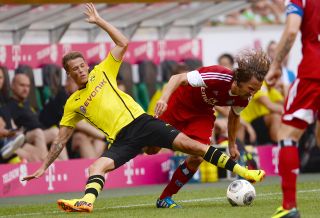 Jurgen Klopp's side have started the new campaign brilliantly, posting victories in all four of their league fixtures.

Dortmund's defence has also been in form, conceding just two goals in their four fixtures, and they will head into Saturday's match brimming with confidence.

They could be missing Polish forward Robert Lewandowski, though, with the 25-year-old returning to Germany early after suffering an injury while on international duty.

Lewandowski hurt his knee in a FIFA World Cup qualifier against Montenegro on Friday, and had to pull out of Tuesday's fixture against San Marino as a result.

The striker, who scored 36 goals in all competitions for Dortmund last term, was diagnosed with tendonitis in his left knee by his club's medical staff.

Mkhitaryan may play more of an advanced role if Lewandowski misses out, with the Armenia international scoring twice in Dortmund's last match, a 2-1 win at Eintracht Frankfurt.

Hamburg have started the season slowly, registering just one win from their first four matches, leaving them 12th in the table.

That victory came in their last match, a 4-0 trouncing of newly promoted Eintracht Braunschweig, and they will not fear their high-flying opponents.

Hamburg did the Bundesliga double over Dortmund last term, following up a 3-2 home win in September with an outstanding victory on the road in February.

Despite conceding an early goal, Hamburg came from behind to win 4-1 as Son Heung-Min, who moved to Bayer Leverkusen in the close-season, and Artjoms Rudnevs scored doubles.

Hamburg captain Rafael van der Vaart is in doubt for the clash with a thigh strain that ruled him out of the Netherlands squad, with coach Thorsten Fink admitting it was unlikely that he would feature.

Van der Vaart's absence may give Turkey international Hakan Calhanoglu a chance to shine, though.

The 19-year-old made his international debut on Friday in Turkey's 5-0 World Cup qualifying win over Andorra, while he also scored twice off the bench – after replacing Van der Vaart – in Hamburg's recent 4-0 triumph.