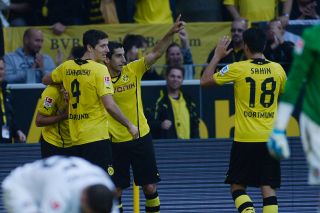 Jurgen Klopp's men, who were deposed as German champions by Bayern last season before losing to them in the final of the UEFA Champions League, go into the game with a 100 per cent record following their 1-0 win against Werder Bremen last Friday.

Dortmund have yet to lose in any form of competitive football this season, also claiming a 4-2 victory against Bayern in the DFL Supercup in July.

Still, Klopp's men will have unhappy memories of this fixture from the previous campaign, when Frankfurt twice came from behind to claim a 3-3 draw in a thrilling encounter.

The visitors are likely to be heavy favourites going into this one, though, with Armin Veh's side's only league win coming against Eintracht Braunschweig last Sunday.

Klopp still expects a tough game against Frankfurt - who should be in buoyant mood after securing qualification for the group stages of the UEFA Europa League with a 4-1 aggregate win over Qarabag.

"We not only have to play against Eintracht Frankfurt, but also against their huge euphoria.

"I expect an intense game."

Dortmund approach the game with a near fully fit squad, midfielder Ilkay Gundogan (back) and Lukasz Piszczek (hip) their only absentees.

Frankfurt are still without striker Srdjan Lakic (back) - on loan from Wolfsburg - while right-back Sebastian Jung (muscle tear) and attacking midfielder Marc Stendera (knee ligament) are both definitely out.

Robert Lewandowski has put the fallout from his failed move to Bayern behind him to net two goals in his opening three games.

The Pole is not the only star in the Dortmund attack, with the likes of Pierre-Emerick Aubameyang, Henrikh Mkhitaryan and Marco Reus all in line to feature, and they should be confident of hitting the target against a Frankfurt side that has already conceded seven goals this term.