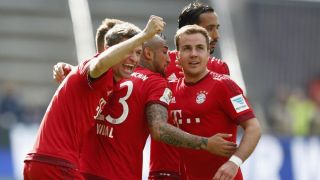 Bayern Munich will have to wait another week to win the Bundesliga title despite beating Hertha Berlin 2-0 on Saturday.

The league leaders eased to a relatively straightforward win at the Olympiastadion on Saturday.

Arturo Vidal broke the deadlock in the 48th minute with a deflected strike before Douglas Costa made sure of the points 11 minutes from time with a stunning strike, cutting inside from the right and firing into the top-left corner.

But it was not enough to clinch the title for another year as second-placed Borussia Dortmund maintained a seven-point gap to the defending champions, winning 3-0 away at struggling Stuttgart.

The result was effectively made safe by Mkhitaryan after 55 minutes but Dortmund's title challenge will come to an end should Bayern beat Borussia Monchengladbach at home next weekend.

Hannover avoided their relegation being confirmed by coming from behind to draw 2-2 at 10-man Ingolstadt.

Alfredo Morales put Ingolstadt ahead 10 minutes in but the hosts were dealt a blow when defender Romain Bregerie was sent off in the 20th minute for a foul on Felix Klaus.

The 10 men went 2-0 to the good through Moritz Hartmann five minutes later but Hiroki Sakai and Hiroshi Kiyotake rescued a point for Hannover in the second half, although Daniel Stendel's men are all but down, nine points adrift of the relegation play-off place with three games left.

Bayer Leverkusen capitalised on Hertha's slip-up to tighten their grip on third place, coming from behind to dent Schalke's Champions League push with a 3-2 win at the Veltins Arena.

But Eric Maxim Choupo-Moting and Sane hit home to give Schalke a 2-0 lead inside 30 minutes. However, two goals in the space of three minutes in the second half from Julian Brandt and Karim Bellarabi restored parity.

And Javier Hernandez completed the comeback just short of the hour mark, scoring his 17th goal in 27 Bundesliga matches with a fine finish across the face of goal.

Elsewhere, Augsburg moved five points clear of the relegation play-off place with a 2-0 success at Wolfsburg and Anthony Modeste and Marcel Risse each scored doubles as Cologne thumped Darmstadt 4-1.