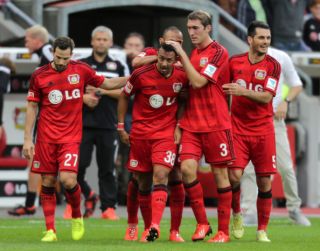 Roger Schmidt's side have scored 18 goals in just five competitive games so far this season and already look to be a force, having beaten Borussia Dortmund on the opening weekend.

An own goal from Roma loanee Tin Jedvaj gave Hertha the lead after 24 minutes, but the Croatian redeemed himself five minutes after half-time, getting on the end of Gonzalo Castro's throughball to round Rune Jarstein and finish.

Julian Schieber restored the visitors lead on the hour-mark, only for Leverkusen to restore parity once again through Emir Spahic's powerful header.

Schieber nearly bagged another goal a few minutes later, but Leverkusen substitute Julian Brandt pounced to put Schmidt's men ahead for the first time after Karim Bellarabi's effort had rattled the post.

Bellarabi was then on target himself four minutes before the end to wrap up the result with a fine volley from Hakan Calhanoglu's cross.

Leverkusen are sitting pretty at the top of the table after champions Bayern Munich were held by Schalke at the Veltins-Arena in Saturday's late kick-off.

Robert Lewandowski was on hand to poke home after just 10 minutes following some neat interplay with Sebastian Rode, but Benedikt Howedes restored parity just after the hour.

A teasing free-kick from Sidney Sam caused havoc in Bayern's six-yard box, causing debutant Xabi Alonso to cannon a clearance off Howedes and into the net.

Replays suggested the ball may have come off the arm of the Germany man, although the controversy is unlikely to bother Schalke boss Jens Keller, who will be hoping the result can act as a platform to turn around a poor start to the season.

There was no such respite for Hamburg though, who succumbed 3-0 to Paderborn - the newly promoted side gaining their first Bundesliga victory through goals from Elias Kachunga, Mario Vrancic and Moritz Stoppelkamp.

Stuttgart coach Armin Veh is another man under pressure, with the club's fans showing their dissatisfaction during their 2-0 home defeat to Cologne, sealed by first-half strikes form Yuya Osako and Anthony Ujah.

Meanwhile, Werder Bremen were held to their second 1-1 draw of the season by unbeaten Hoffenheim, and Frankfurt twice came from behind to earn a 2-2 draw away to Wolfsburg.