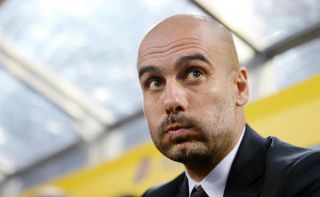 A first-versus-second clash heading into the weekend, reigning champions Bayern travelled to Borussia-Park having won their previous four league fixtures, scoring 16 goals and conceding none in the process.

But Bayern's fluidity was missing for large swathes of the match as they were shut out for only the second time this season and held to a 0-0 draw.

Max Kruse and Andre Hahn both had good sights of goal after rapid breakaways, but Germany number one Manuel Neuer proved typically tough to beat.

For all of Bayern's dominance of the ball in advanced areas, Martin Stranzl and Alvaro Dominguez were rock-solid in the heart of the home defence to preserve a draw that means both teams remain unbeaten in the Bundesliga this term.

The draw maintains Bayern's four-point advantage over Lucien Favre's side, but may give Gladbach confidence to keep the pressure on Guardiola's men in the seeming absence of a challenge from Borussia Dortmund this term.

Joining Gladbach on 17 points are Wolfsburg, after they swept aside Mainz 3-0 at the Volkswagen Arena to secure a 100 per cent league record for October.

Kevin De Bruyne and Ivica Olic were both denied by Mainz keeper Loris Karius before the interval, but a near replica of the first goal put Wolfsburg two to the good 14 minutes into the second half.

Naldo once again thundered a header goalwards from a Schafer set-piece, but Ivan Perisic was on hand just in front of Karius to cleverly flick the ball in.

Max Arnold hit the post as Dieter Hecking's side sensed a third, which eventually arrived in the closing stages as Daniel Caligiuri tapped in after persistent work on the right from substitute Junior Malanda.