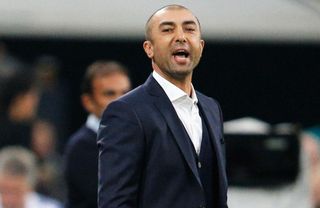 Di Matteo – who was appointed as Jens Keller's replacement last Tuesday – witnessed his new side earn a relatively comfortable win at the Veltins-Arena.

Klaas-Jan Huntelaar opened the scoring in the 19th minute with a powerful header from Julian Draxler's cross.

Draxler then turned goalscorer in the 65th minute with a deflected strike to give Di Matteo a dream debut at the helm of the Gelsenkirchen club.

But there was nothing for Schalke's arch rivals Dortmund to celebrate as their winless league run was stretched to five games courtesy of a 2-1 defeat at Cologne.

Midfielder Kevin Vogt prodded home the opener for the hosts in the 40th minute, only for the returning Marco Reus to set up Ciro Immobile for the equaliser three minutes after half-time.

Yet there was to be a twist in favour of Cologne, who condemned under-fire Dortmund coach Jurgen Klopp to another defeat in the 74th minute, attacker Simon Zoller turning home Yuya Osako's delivery after an error from Roman Weidenfeller.

Dortmund appear to be in the midst of a crisis, however, defending champions Bayern Munich produced another scintillating display of their quality with a 6-0 hammering of hapless bottom club Werder Bremen.

Captain Philipp Lahm and Mario Gotze both scored doubles as Pep Guardiola's side cantered to their sixth triumph of the campaign.

A brace from Max Kruse gave high-flying Borussia Monchengladbach a 3-0 success at Hannover and Daniel Caligiuri was on target twice for Wolfsburg in a 2-1 away win against Freiburg.

Meanwhile, Stuttgart produced a magnificent comeback to claim a point with a 3-3 draw with Bayer Leverkusen.

Two goals in the space of nine minutes from Son Heung-Min and a 41st-minute Karim Bellarabi effort put Leverkusen in command but Stuttgart hit back as three in 19 minutes from Timo Werner, Florian Klein and Martin Harnik salvaged a remarkable result.