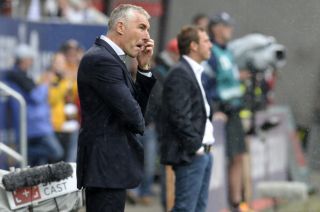 Mirko Slomka's men are five points adrift of fourth-bottom Stuttgart with two games of the season remaining and face a battle to hold on to 16th spot, which would leave them facing a relegation play-off.

The bottom two, Eintracht Braunschweig and Nuremberg, are both within striking distance of Hamburg, who delivered a dismal first-half display in their latest outing.

Hosts Augsburg moved three goals ahead inside 42 minutes courtesy of Halil Altintop's brace and a goal from Andre Hahn.

Heiko Westermann pulled one back before the break, but Hamburg remain in danger of losing their Bundesliga status for the first time.

In Sunday's other match, Schalke tasted defeat at home in the league for the first time in 2014.

Patrick Herrmann grabbed the only goal 10 minutes before half-time as Borussia Monchengladbach secured a 1-0 win in Gelsenkirchen.