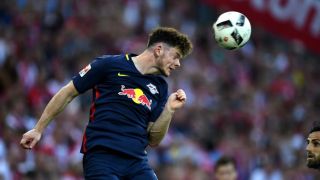 RB Leipzig attacker Oliver Burke has revealed he turned down a move to Tottenham because he feared he would struggle to secure regular first-team action at a big club.

The Scotland international was hot property in the final weeks of the transfer market as he hit form for Nottingham Forest, but he opted to snub a move to the Premier League in favour of a left-field switch to Bundesliga newcomers Leipzig.

After making a fine start to life in Germany, Burke has defended his decision to reject offers from clubs closer to home and insists he has no regrets.

"I was going to visit Tottenham," he told the Daily Mail. "But I said no because Leipzig showed enough care and attention to the little details.

"For a young man I don't want to go somewhere that is a big club but, really, am I going to play? Am I going to progress? Or are they just going to stick me out on loan, which happens a lot at English clubs nowadays.

"You can only look at Chelsea, and see the amount of talent they have, but they're all on loan, not getting used. You don't feel wanted when you sign for a club, you're there for two training sessions, and then they buy someone else in your position for double the amount.

"So for me it's a no-brainer really. I believe here they made the point clear I was going to be a vital part of the team, which I have shown against Cologne and [Borussia] Dortmund.

"I don't regret not going to the Premier League."