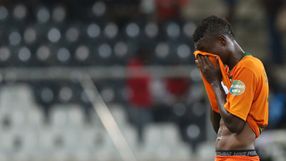 A solid, defensive performance held at bay all that an increasingly desperate Zambia could throw at them and, combined with Nigeria's win over Ethiopia in Rustenburg, means Zambia will play no further part in the tournament.

They are the first holders to be eliminated at the first stage since Algeria in 1992.

Burkina Faso, outsiders coming into the tournament, now play either Togo or Tunisia in the quarter-finals on Sunday, ensuring at least one outsider in next week's semi-finals.

"We believed we could go further in this. It's a night of history for Burkina Faso," said coach Paul Putt. It is the first time since 1998, and only the second time ever, that they have reached the last eight.

"We had double motivation being close to qualification and playing against the champions. I told the players this chance might never come again," the Belgian-born coach added.

Zambia will rue missing their only real chance of the game in the 17th minute when Collins Mbesuma shot straight at the goalkeeper in a rare breach of the Burkinabe defence.

A cross from Chisamba Lungu set up Mbesuma right in front of goal but his shot went straight to Daouda Diakite.

They dominated most of the game and virtually camped in the Burkina Faso half in the second half, throwing their centre backs into centre-forward positions for the final 10 minutes.

But the defence held firm and Burkina might have sneaked a goal in the last minute on the counter-attack when Jonathan Pitroipa just missed stretching home a cross from Charles Kabore.

Burkina Faso did suffer one setback with an early injury to Alain Traore, top scorer at the tournament, who went off with a knee injury in the 11th minute.