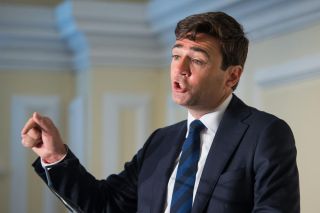 Manchester mayor Andy Burnham has called for Bury to be admitted to the National League after EFL members signalled their intention to reject a plea for them to return as a League Two club.

Bury were expelled from the Football League at the end of August after a takeover had collapsed, and had hoped to be allowed to resume the fourth tier under new ownership next season.

However, the EFL’s remaining 71 member clubs decided to press ahead with a plan to restore the league to its full complement by relegating only one side from League Two next season at a meeting on Thursday, and a formal vote will be taken on that proposal at a later date.

That came as a blow to the Shakers and now Burnham, Mayor of Great Manchester, has revealed that the Bury FC Rescue Board, of which he is a member, will turn its attention to the National League.

He told an audience an his monthly Mayor’s Question Time: “It is a really sad day – 125 years in the Football League, an FA Cup winner. This club deserved more respect from the football family.

“It is now time to take the fight for the football club up another level. You cannot let this rest here. To send Bury FC down to the Northern Counties Football League, to let it plummet through the divisions, is essentially putting the future of the club on the line.

“Although Bury FC have not been readmitted to League Two, it does still mean the authorities are a club short in the Conference for next season. That is where we take our call now.

“You cannot destroy a football club with this amount of heritage, with one of the best academies in English football. The club means so much to this town – the Leader of Bury Council is here tonight and we are as one on this.

“This football club needs to be saved. The football family needs to be fair. This town needs now to get behind the fight to keep Bury FC as a football club that has a realistic chance of getting back into the English Football League within a couple of years.

“Yes, Bury FC should face punishment for what happened because it gained an unfair advantage. But it shouldn’t be thrown into the wilderness like this.”

Bury North MP James Frith, chair of the rescue board,  said on Twitter that “self-interest was served cold” by the EFL clubs and that he would not be “walking away” from a rescue bid.

Bury, who had their first five League One games of the season postponed after failing to prove they had the finances in place to see out the season, had hoped EFL members would receive their request sympathetically, but their hopes were dashed on Thursday afternoon.

“The debate included consideration of the proposal submitted by the Bury FC Rescue Board for the club to be admitted to League Two under new ownership in season 2020/21.

“Following in-depth discussions, it became clear that the proposal did not have the necessary support and that EFL clubs favoured extending the existing principle of a reduction in relegation across all divisions as a means of returning to 72 clubs now and for the future.”

EFL executive chair Debbie Jevans added: “Following the discussion today, clubs have established that the preferred direction of travel is to reduce relegation from League Two as a means of returning to 72 clubs. The clubs felt that, in a difficult situation, this approach maintains fairness for all members and upholds the principle of the football pyramid.”