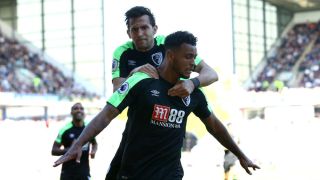 The Clarets were already guaranteed a seventh-place finish before Sunday's game – their highest top-flight position since the 1973-74 campaign, when they placed sixth.

It looked like they would end 2017-18 with a return to winning ways after four matches without a victory, before King levelled with a fine strike and Wilson netted the winner in injury time.

Chris Wood had given Sean Dyche's side a first-half lead, inadvertently diverting Ashley Westwood's goal-bound effort past Asmir Begovic in the 39th minute.

Jeff Hendrick squandered a good opportunity to put the game beyond Eddie Howe's side early in the second half - something they would later pay for.

After a wonderful season, Dyche and Burnley's attentions will now turn to building on their Premier League success next season and gearing up for a first European adventure since 1966-67.

Second-half goals from King and Wilson secure three points, as our third campaign ends with victory!  1-2  (FT) May 13, 2018

The Burnley goalkeeper was called into action again moments later to push away Charlie Daniels' powerful drive from just inside the penalty area.

The hosts belatedly created an opening of their own just after the half-hour mark, but Jack Cork dragged his shot from the edge of the area disappointingly wide of Begovic's right-hand post.

The Clarets' more positive approach towards the end of the first half was rewarded six minutes before the interval when Wood scored his 10th Premier League goal of the season – not that he knew a great deal about it.

Stephen Ward's cross was fired towards goal by Westwood, clipping the former Leeds United striker's heel just a few yards out and looping over the wrong-footed Begovic.

Hendrick should have doubled Burnley's advantage shortly after the restart, but fired straight at Begovic from 15 yards, while Ibe flashed an effort wide of Pope's far post.

Burnley's hopes of ending the season with a win were extinguished with 16 minutes remaining when King took advantage of some generous defending.

The home defence made a real mess of clearing after Pope had kept out substitute Jermain Defoe's close-range effort, allowing King to cut in from the left and whip a fierce drive into the far top corner.

Their woe was compounded in the third minute of added time when Kevin Long was caught in possession by Defoe, who unselfishly squared to Wilson to stroke past Pope and seal the win.