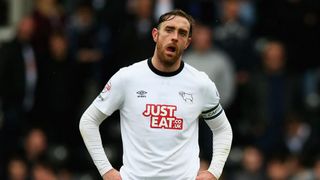 Derby County were made to pay for a series of defensive errors as they were beaten 4-1 by fellow promotion chasers Burnley at Turf Moor.

Richard Keogh scored an own goal and conceded a penalty, albeit a debatable one, for a foul on Andre Gray, while Jason Shackell gifted Sean Dyche's side - who move above Derby into third with the three points - a second spot-kick with an inexplicable handball in a frustrating outing for Paul Clement's men.

After an impressive start, Derby fell behind in the 29th minute when Keogh, preoccupied with keeping Gray away from the incoming ball, inadvertently diverted Matthew Lowton's cross into the back of his own net.

Keogh's night went from bad to worse when, eight minutes after the restart, he was adjudged to have illegally brought down Gray inside the box and the striker sent Scott Carson the wrong way from the penalty spot to restore Burnley's lead.

The hosts were awarded a second spot-kick before the hour mark when former Burnley man Shackell was deemed to have handled Lowton's cross, and Sam Vokes slammed home from 12 yards.

Derby attempted to get themselves back in the match but were three behind in the 66th minute, when Scott Arfield's 25-yard effort looped up off Shackell and beat Carson, and it proved to be enough to settle the match.