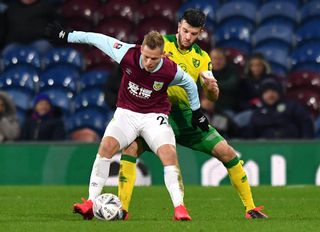 Vydra came on as a substitute to snatch a stunning winner at Southampton last weekend and could be rewarded with his first Premier League start of the season against Bournemouth.

Top scorer Chris Wood is facing a battle to recover from a hamstring injury he suffered in the win at St Mary’s while Ashley Barnes is still definitely out.

Dyche said: “He (Vydra) came in and did a really good job last week – he has had his moments and he got a bit of game time and we were pleased with him.

“He scored a fantastic goal and has rightly been feeling good about himself this week.

“The thing with the strikers is they go in and out of those spells when they haven’t scored and when they get one, they get three.”

A start would signal a significant change in fortunes for Vydra, who had been heavily backed for a move away from Turf Moor during the transfer window.

And it is a stark contrast to the situation regarding £15million signing Ben Gibson whose own frustrations have resulted in him continuing to train with his former club Middlesbrough.

Dyche would not be drawn on the future of Gibson, who remains under contract at Turf Moor, other than to describe it as a “unique situation”.

“There is a private angle to it and it will remain private at this time,” said Dyche.

“He’s at Boro, he’s training there to keep fit and stay sharp. But he’s still a Burnley player and he’s still contracted to Burnley.”

Victory over Eddie Howe’s Cherries could prove pivotal to the Clarets in their hopes of stepping up their challenge for a return to Europe.

Dyche, who welcomes Johan Berg Gudmundsson back from injury, added: “I have a lot of respect for Eddie and his team and what they look to achieve each season.

“They have had a tricky spell lately but we won’t be under-estimating them. We have to be right and ready to go and deliver.”