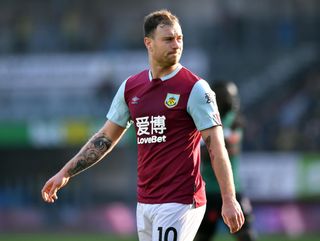 Burnley striker Ashley Barnes is to undergo surgery to repair a hernia problem, the club have announced.

The 30-year-old, who has scored six times in the Premier League this season, has been restricted by the injury in recent weeks and missed last Saturday’s loss at Chelsea.

The club have not given any indication how long the player will be out but a normal timeframe would be two to four weeks, depending on the severity of the problem.

Manager Sean Dyche told the club’s website: “Hopefully he will have a smooth recovery.

“You don’t like losing good players but, equally, it allows other players to come in and perform and that’s what we’ll be looking for them to do.”

On the positive side, Jay Rodriguez has returned to training after illness and Chris Wood hopes to be able to face Leicester on Sunday despite a broken nose.