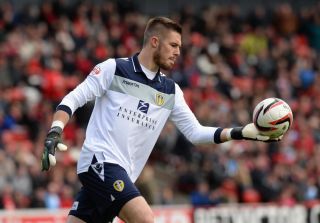 The England international has been an ever-present for Leeds since joining on loan from Stoke City in February.

Butland's time at the club has coincided with a dreadful run of form, and as a result, Butland has conceded 26 goals in 14 matches.

But recent clean sheets against Blackpool and Barnsley – wins that secured the club's place in the Championship next season – have boosted Butland's confidence.

And the experience has been highly beneficial for the keeper, who returns to Stoke at the end of the season.

Butland told United's official website: "We have been on a tough run and conceded a lot of goals.

"So, it has been good to get a couple of clean sheets in the last two weeks.

"We had been at a stage where every mistake we made ended up in a goal, but thankfully things have come together a bit more in the last couple of weeks.

"The spell has had a few ups and downs but what hasn't changed is the experience I am getting of playing for a big club.

"There is a lot of expectation that comes with playing in front of big crowds.

"Yes, it has been tough and we haven't picked up enough points, but it has been something that has taught me a lot and it will help me moving forward."

Butland and Leeds will next be in action at struggling Birmingham City - his former club - on Saturday.