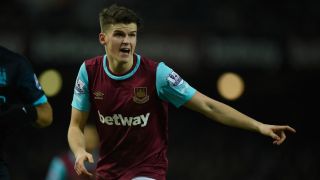 West Ham United full-back Sam Byram said he is more worried about singing his initiation song at the club than he was for his Premier League debut.

Byram played 77 minutes off the bench in West Ham's 2-2 draw against Manchester City on Saturday not even a week after signing from Championship outfit Leeds United.

The 22-year-old acquitted himself well on debut as he handled the tricky assignment of containing City's potent forwards with great composure.

But Byram said nerves were not an issue for him once he realised he was coming on. Instead, it is singing for his team-mates that really has him nervous.

"I wasn’t excited, I wasn't nervous I just tried to keep a cool head and approach it like a normal game," Byram said.

"I've not had my initiation yet. It’s normally on the away trip you’ve got to get up and sing. I’m trying not to think about it!

"Can I sing? No, I’m horrific. We were in the hotel before the game and I was thinking someone was going to be tinging the glass to get me to do it.

"I will be more nervous doing that than playing. One of the young lads when I was at Leeds sung Uncle Kracker, Follow Me. That went down well. I might stick with that one."

While the youngster is not looking forward to his solo performance, he is enjoying working under West Ham manager Slaven Bilic.

"As a young player the main thing you want to do is get better. He’d identified the areas he thinks I can improve on and explained how he would help me improve on them," he said.

"I spoke to the manager and I really like the way he spoke about West Ham and how he likes to play, and how he could improve me was the main thing.

"There’s the Olympic Stadium, the quality of players in the squad. In training I’ve been blown away by some of the things some of them do in training."