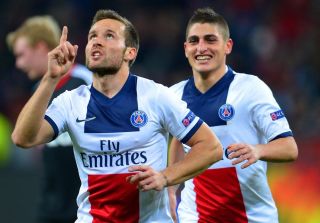 PSG, who signed the midfielder from Newcastle United in January, will be crowned champions for the second season running with victory over Sochaux on Sunday following Wednesday's win over Evian.

Cabaye, part of the Lille side that won Ligue 1 in 2011, is excited to add to his personal medal haul so soon into his PSG career.

"We just need one victory to get the title and that is the most important thing," said the 28-year-old. "It would be a good thing to be champion with PSG.

"Last time I won something it was a double and now it will be another double.

"I have never won the Coupe de la Ligue and it will be the second time for me to win a championship so for me it is a great thing.

"That is why I came here to play with PSG."

Striker Edinson Cavani was relieved to secure all three points on Wednesday thanks to Blaise Matuidi's late winner, but admitted it was not a vintage performance from Laurent Blanc's men.

"Maybe, maybe we could play better, but when the opponent closes the space it's really difficult," he said.

"That makes it really difficult to get to their goal.

"Finally we managed to get the victory, and we're just one step away to reach our target."