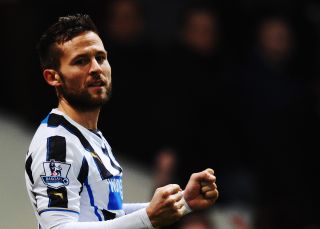 The France international has been in fine form this season and continued his impressive campaign with a brace in Newcastle's 3-1 win over West Ham on Saturday.

That victory leaves Newcastle eighth in the Premier League, seven points off the UEFA Champions League places, and Cabaye claims he is content at St James' Park despite being linked with a move to the French champions.

"For me the most important thing is to do my best for the team," said the former Lille man.

"If the manager or the staff are happy with my performance and the fans who are supporting me are happy, I am happy."

Cabaye came close to joining Arsenal in the close-season before a move to the Emirates Stadium failed to materialise.

The 28-year-old does not feel that has changed his commitment to Newcastle, though, and backed the club to remain in the Champions League qualification picture.

"My mentality hasn't changed, even after what happened in the summer, and I will do my best for the team every day," he added.

"We are in a good position and we stay just behind the top six, top seven. We can work without pressure for the moment and it's good for us.

"Now we just have to focus on the next game and we will see what is going to happen for maybe the last four or five games where we are going to be.

"We are in good shape. Champions League - it's a bigger level. But we have the capacity to just stay next to the big teams. If we are still in a similar position at the end, why not?"