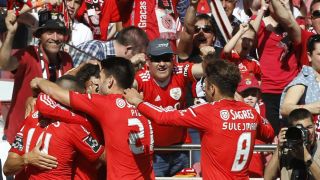 Benfica retained their Primeira Liga title on Sunday after they were held to a goalless draw by Vitoria Guimaraes and Tiago Caeiro's late strike ensured Porto were held 1-1 at Belenenses.

A goal just before half-time from the prolific Jackson Martinez looked to have given second-placed Porto a victory that would have closed the gap to only a point with just one game remaining, but there was a late twist.

Caeiro came off the bench to equalise five minutes from time at Estadio do Restelo and ensure Belenenses' Lisbon rivals have secured back-to-back titles, becoming champions of Portugal for a 34th time.

Jorge Jesus' side were unable to secure a victory at the Estadio Dom Afonso Henriques on Sunday, but a 0-0 draw against Vitoria was enough and they lead Porto by three points with a game remaining and are champions due to their head-to-head record against Julen Lopetegui's men.

Benfica celebrated in style on the pitch at the final whistle after learning that Porto had been denied by Caeiro, meaning they can go into next Sunday's clash with Maritimo next Sunday without the tension of the title being at stake.

Porto had won three titles in a row before last season, but is in now Benfica who have emerged as the dominant force in Portuguese football.

While Benfica will be toasting another title, Gil Vicente must prepare for life in the Segunda Liga after they were beaten 2-1 at already-relegated Penafiel.

Guedes put bottom side Penafiel in front just after half-time, but Joao Vilela gave the visitors hope when he levelled after 67 minutes.

A draw would still not have been enough to keep Jose Mota's charges up and David Mbala added insult to injury by scoring a winner in stoppage time to seal their fate.

While the Barcelos outfit's four-year stay in the top tier is at an end, Arouca are safe despite slumping to a 2-1 defeat at fellow strugglers Vitoria Setubal, who were also in danger of suffering the drop.

Academica were also in the mire, but can look forward to another season in the Primeira Liga despite a 3-2 loss at Pacos de Ferreira.