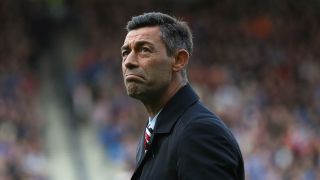 Rangers have sacked manager Pedro Caixinha after seven months in charge at Ibrox.

The 46-year-old was appointed as Mark Warburton's successor in March and won 14 of his 26 games in charge.

Wednesday's 1-1 draw at home to Kilmarnock proved to be Caixinha's last at the helm and he leaves with Rangers fourth in the Scottish Premiership, eight points behind leaders and bitter rivals Celtic after 10 games.

Motherwell beat Rangers 2-0 in the semi-finals of the Scottish League Cup last weekend, compounding a poor start to a campaign that began with the ignominy of being knocked out of the Europa League by Progres Niederkorn of Luxembourg.

A statement released by the club read: "The decision to part company with Pedro was taken after careful consideration and the search for a new manager will begin immediately.

"Results have been disappointing and not commensurate with the level of investment that was made available."

announce today that Pedro Caixinha has left the Club: October 26, 2017

Rangers travel to Hearts in their next Premiership match on Saturday.