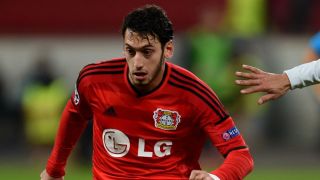 The Turkey international struck the only goal of the game at the BayArena on Wednesday as Roger Schmidt's side seized the first-leg advantage in the last 16 tie.

Having received a sumptuous backheel from Karim Bellarabi, Calhanoglu fired high above Moya to break the deadlock after 57 minutes, handing the Bundesliga outfit a narrow advantage heading in to the second leg.

"We know how strong Atletico are at home," he said. "But if we play like we did today, we will be in a good position to progress.

"We have proven our strength in all Champions League matches so far and today was no different. "

"If you beat a classy side like Atletico, it's a definite achievement," he said.

"It will be tough in the second leg, but after our latest matches [in the Bundesliga], which were difficult for us at times, we did an outstanding job. Everyone was fully focused from the first to the last second."