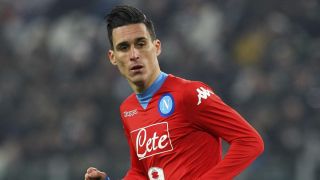 Jose Callejon has committed his future to Napoli by signing a contract until 2020.

The former Real Madrid forward still had a couple of years to run on his old deal, but had been linked with a return to La Liga with Atletico Madrid.

However, Napoli have moved swiftly to ward off any potential interest from Spain by handing the 29-year-old fresh terms.

A short club statement read: "Napoli are pleased to announce Jose Callejon has renewed his contract until 2020."

Callejon signed for Napoli in July 2013 and won the Coppa Italia at the end of his first season in Italy.

He scored seven goals in 38 Serie A appearances last season as Napoli finished runners-up to Juventus.