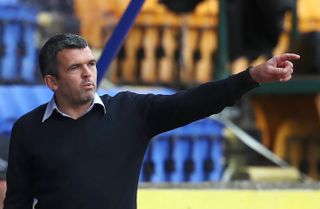 Saints had lost their last four Premiership games without scoring but goals from Jason Kerr and Chris Kane put the Perth side in the driving seat before Michael Tidser pulled one back for the Lowland League champions.

Davidson, whose side had only scored once in their previous seven matches, said: “It was tough, in the first 20 minutes they made it really difficult.

“Once we settled down we started to move the ball well and got the goal at the right time.

“Hopefully it will kick-start some more goals.”

Davidson was particularly thrilled to see striker Kane hit only his second goal since July 2019 after a calf injury delayed his start to the season.

He added: “I knew Chris was coming back so it was one thing I was quite positive about.

“I know what Chris can do, his work rate is tremendous, you saw that in the last 10-15 minutes.

“He closed them down and put them under the pressure.”

“I didn’t see much of a difference at times in the game.

“I thought in the first 20 minutes of the second half the lads were feeling sorry for themselves but in the last 15-20 we were on top of them once we got the goal.”