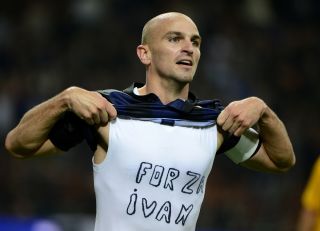 Cambiasso struck his third goal of the season in the victory as Inter got back to winning ways, having failed to take three points from their previous three games.

Inter raced into a two-goal lead, and although Verona pulled a goal back just after the half hour, Cambiasso struck to restore their advantage at the break.

Rolando made it 4-1 just before the hour, and even though Romulo netted for the visitors Inter were able to secure a win to take them fifth in Serie A.

"I think the team has found its identity and we try to play our game," the Argentinian told the club's official website. "In recent matches we haven't got the results we wanted but we've been unlucky.

"We played very well tonight. Fortunately we managed to play well and win because last week in Turin (3-3 against Torino) we were so close to victory but weren't able to hold on.

"We did lots of things that the gaffer asked us to do but of course there are areas where we still need to improve.

The 33-year-old dedicated his strike to team manager Ivan Cordoba and revealed the Colombian had been taken to hospital suffering from peritonitis.

"I dedicated my goal to Ivan Cordoba because he's undergone an operation and we miss him," he added.

"He does a great job every day and is an important figure for the team."