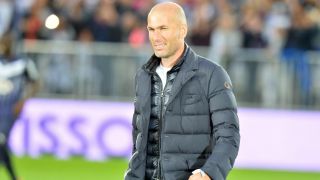 Real Madrid have brought an end to the farcical reign of Rafael Benitez and Florentino Perez is hoping that a model which has worked so well for fierce rivals Barcelona will rekindle their success after appointing club icon Zinedine Zidane to replace him as head coach.

Benitez lasted just 18 La Liga matches at the Santiago Bernabeu, sacked amid rumours of dressing room discontent and dissatisfaction amongst supporters which brought an end to his spell in charge, despite losing only three times in the top flight.

His time at the helm appeared doomed from the start, with immediate doubts raised over his tactical style and widespread disappointment at the sacking of Carlo Ancelotti, with president Perez forced to issue him with a vote of confidence in November after losing 4-0 at home to Barca in El Clasico.

After deciding to axe Benitez, Madrid have turned to Zidane, their former playmaker who helped them to Champions League glory in 2002, the highlight of a five-year spell with the club during the Galacticos era.

Speaking after his appointment on Monday, Zidane said: "It is the best club in the world with the best fan-base. I will do my very best so that at the end of the season this club will have a trophy.

"I will work hard with all the players and I think it will go well. It is an important day for me and an emotional day - even more than when I signed as a player."

Madrid have been grooming Zidane for the position for two-and-a-half years and Perez has never hidden the fact he saw the legendary Frenchman as their future boss.

First, the World Cup-winner served as assistant to the popular Ancelotti in 2013-14 as Madrid won La Decima. Zidane then took a head coaching job for the first time and led Real Madrid Castilla for 18 months up until his appointment.

The 43-year-old's first season was far from smooth, with a row over whether he had sufficient coaching badges coupled with Madrid's second string coming sixth in Segunda B Group 2 – one of four divisions that form Spain's third tier – a finish that saw them fail to reach the promotion play-offs.

This season, Zidane leaves his team in better shape - Castilla are second with 37 points having suffered just two defeats from 19 games.

There is a huge question mark, though, over whether a year and a half in a lower league is suitable preparation for arguably the biggest managerial job in football, even for a man who reached the very highest level in his playing career.

But it is a method that has worked before. Over at Camp Nou, playing icon Guardiola had only coached Barcelona B for a single campaign before getting the top job and what followed was a stunning era of success – three leagues, two Champions Leagues, two Copa del Reys and a total of 14 trophies in four years.

Guardiola's impact looks even better against the backdrop of taking charge after Barca had failed to win a major trophy in the previous two seasons. Madrid suffered that fate last year and have now turned to Zidane in a bid to avoid that happening again.

Current Barcelona boss Luis Enrique is another who enjoyed great success playing for the club, and working for the B team, before going on to take the top job, although he also had spells with other clubs in Roma and Celta Vigo.

And while it has worked for Barca, the strategy is not a guaranteed method for success – as highlighted by Filippo Inzaghi's inability to revive AC Milan after making an early step up from a role in charge of the youth team.

If Zidane fails, the scrutiny could well turn in Perez's direction again after the controversial call to replace Ancelotti with Benitez and then pull the plug at such an early stage.

Perez needs his call on Zidane to reap dividends similar to that of Guardiola. If it does not, a messy political situation and more instability awaits.