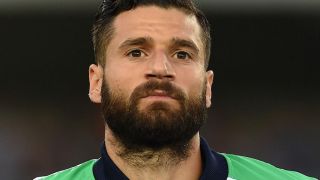 Antonio Candreva looks increasingly likely to leave Lazio after the Italy international's agent revealed his client was ready for "a new challenge".

Napoli and Inter have both reportedly failed to complete deals for Candreva in recent weeks, although the 29-year-old winger is seemingly undeterred in his desire to leave Stadio Olimpico, where he had an initially difficult relationship with fans following his 2012 move from Udinese.

"He joined the Biancocelesti and even got insults from some fans," Federico Pastorello is quoted as telling Tele Radio Stereo.

"He won them all over, but now Antonio has realised it's time for a new challenge. Fans shouldn't be upset or angry, it's part of the logic that brings clubs and players together, and then clubs take decisions to go their separate ways.

"That doesn't mean we should leave on bad terms. This experience has brought him great relationships over the years with the president [Claudio Lotito], coaches, team-mates and fans.

"If he were to leave, it would be with a smile."