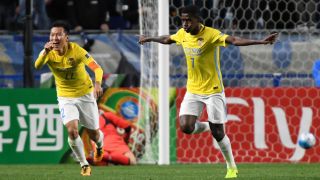 Fabio Capello believes Ramires would make a "great reinforcement" for Inter, though he is eager to keep the Brazilian at Jiangsu Suning.

Ramires has plied his trade in the Chinese Super League for the last two years after leaving Chelsea in a reported £25million deal.

The Brazil international has been strongly linked with a return to Europe with Serie A's Inter in the last few weeks and he has even expressed his desire to make the switch should the opportunity arise.

Capello understands that urge and why Inter might want to sign him, however the Italian coach – who has been in charge of the club since June – recognises Ramires' importance ahead of the 2018 Super League season.

"We are waiting for him [Ramires] at pre-season training," Capello told Sky Sport Italia. "He is a really serious lad who works hard – he is not a surprise.

"He is really strong and is very important to us. If he remains with us in China, then we will be happy.

"If he moves to Inter, I think he will be a great reinforcement for them, but it doesn't depend on Inter or on us, rather many other factors like Financial Fair Play. I recognise Inter's problems, but I also want to make Jiangsu stronger.

"He is a [N'Golo] Kante [type of player]; very good tactically and very dynamic. Compared with Kante, he is actually even more of a goal-scoring threat. He is a player of absolute quality."