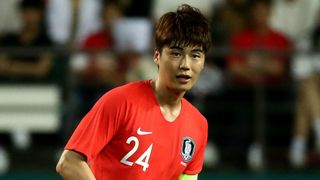 Ki Sung-yueng says he has no problem getting tough with his South Korea team-mates if it helps them to make the most of their World Cup campaign.

Shin Tae-yong's side take on Sweden in Nizhny Novgorod on Monday in their opening match of a tough-looking Group F that also contains Mexico and Germany.

Ki only turned 29 in January but is one of the most experienced heads in the team, having competed at two previous World Cup finals, two Olympic tournaments and two Asian Cups, finishing as a runner-up in 2015.

The midfielder admits it is a different feeling to head into football's grandest competition as team captain but he is determined to make sure every one of the South Korea players shows they deserve to be in Russia.

"We've been preparing for the World Cup for four years and worked very hard, not only those who made the squad but those who didn't," he said. "As a captain, I feel a strong sense of responsibility and I want to do well.

"I want the players to prepare in a comfortable way, so I try to help them in any way. Sometimes, there was tension within the team, and sometimes the atmosphere got too light, so I tried to balance the two. I really want the players to take advantage of this opportunity. It will be a really important experience in their lifetime."

"This is my third World Cup and the World Cup of course is a very tense situation, there's a lot of pressure.

"Pressure-wise for me, I think it's a lot less, but now I'm captain and I feel a stronger sense of responsibility. I think that's the biggest difference."

It has been estimated there could be as few as 1,500 South Korean fans inside the 45,000-seater Nizhny Novgorod Stadium on Monday, but former Swansea City man Ki is just hoping for a packed crowd – regardless of their allegiance.

"I think it's good to have a lot of people in the crowd. Whether they are Swedish or Korean really doesn't matter," he said. "The players have a lot of experience in that aspect. It would be great if we have a full stadium, if the players can feel the World Cup atmosphere.

"Korea have more experience than Sweden. I don't know how many Swedish players have played in the World Cup but we have quite a few players who have had that experience. All that's left is for us to show you on the pitch."