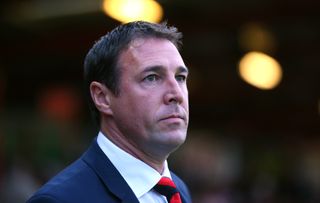 The Scot masterminded a memorable victory over Manchester City in the Welsh side's first home fixture in the Premier League last time out, and has urged his team to look for a repeat against Roberto Martinez's men on Saturday.

However, Mackay is well aware of the threat posed by Everton ahead of the fixture at the Cardiff City Stadium, despite the fact the Merseysiders have drawn both of their opening two games.

"Everton are another team who are good with the ball and counter quickly," he said. "Roberto Martinez has got them playing that way.

"We know how tough it'll be against Everton. We take every game on it's on merits but we'll go and try and win every game.

"The belief after Sunday was good, it was good to get into winning habits and good to continue that against Accrington Stanley (in the League Cup).

"All I want from the fans is to bring the same support and passion they showed against Manchester City to push us on against Everton."