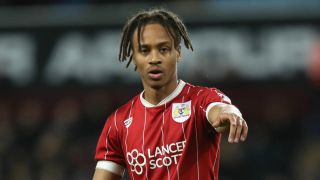 The pair have each signed contracts until 2022

Reid joins from Bristol City, where he scored 19 goals and provided seven assists in the Championship last season.

He was involved in Bristol's brilliant run in the EFL Cup as they knocked out a number of Premier League clubs, including Manchester United, to reach the semi-finals.

The forward is now looking forward to his new challenge as Cardiff prepare to try to preserve their top-flight status.

Speaking to Cardiff's official website, he said: "I'm delighted to be here and to be a Premier League player.

"I want to show my high energy and work rate, as well as being creative and working for the team. I'm buzzing to get started."

Smithies arrives from QPR, where he made 109 appearances and was awarded the Players' Player of the Season award in 2016-17.

Before that he played for Huddersfield Town, where he earned promotion to the Championship and scored the winning penalty in the League One play-off final shoot-out against Sheffield United.

They follow the signings of Josh Murphy from Norwich City and Greg Cunningham from Preston North End.