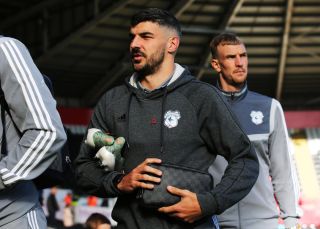 Cardiff fought back from two goals down to salvage a 2-2 draw and an FA Cup third-round replay with Carlisle.

Jack Bridge and Harry McKirdy stunned the Sky Bet Championship side with first-half headers that gave them real hope of a cup upset.

But quick-fire goals from Callum Paterson and Gavin Whyte at the start of the second half spared Cardiff’s blushes and earned a replay at Brunton Park.

Cardiff manager Neil Harris made eight changes to the side crushed 6-1 at QPR last time out. Only Sol Bamba, Leandro Bacuna and Will Vaulks survived from the Loftus Road thrashing that Harris branded “unacceptable”.

Carlisle were looking to get into the fourth round of the FA Cup for only the second time in 23 years.

But the League Two side were given real hope of an upset thanks to a controversial penalty award by referee Geoff Eltringham.

Bridge went down after the faintest of contact with Cardiff defender Bamba, but the official pointed to the spot.

Bridge took the spot-kick but saw his effort saved by Alex Smithies before reacting sharply to head in the rebound after 21 minutes.

Carlisle were hanging on for large periods of the first half but caught Cardiff with a sucker punch in the first minute of first-half stoppage time.

Hallam Hope delivered an inch-perfect cross to the back post and onto the head of McKirdy, who steered the ball back across goal and into the corner of the net to make it 2-0 at the break.

Cardiff clawed their way back into the contest five minutes after half-time. Whyte saw his cross glanced on by Danny Ward for Bamba, who volleyed the ball against the crossbar.

But Paterson pounced to scramble in the rebound and halve the deficit.

The comeback was complete in controversial fashion in the 55th minute. The ball looked to have gone out for a goal-kick, but Paterson played on when he did not hear a whistle.

After some neat interplay he whipped the ball in for Whyte, who nipped in to send a header against a post and in.

Josh Murphy and Vaulks forced stunning saves from Carlisle skipper Adam Collin, before Hope missed a gilt-edged chance to snatch it for the Cumbrians five minutes from time.