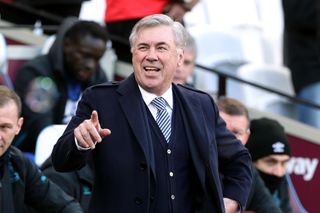 Everton manager Carlo Ancelotti insists he has not changed the mentality of the players but believes providing a clear plan has given them a platform to build their confidence.

Last weekend’s 3-2 win at Watford, from 2-0 down and with 10-men, was the first time since December 2017 the Toffees had come from behind in a Premier League match to win.

That run came under Sam Allardyce, Marco Silva and caretaker boss Duncan Ferguson but Ancelotti has now broken it.

While he said he has not done any work on improving the mentality, Ancelotti believes if the players are comfortable with what their game-plan is then they have a better chance of being successful.

“It is difficult to change the mentality and the character,” he said ahead of the visit of Crystal Palace.

“The work I’ve done is to make the players comfortable when they play, to give them an idea and strong motivation.

“This is my job, honestly I am not able to change the character of the people.”

Having sacked Silva with the club in the bottom three, Everton’s resurgence under Ancelotti has seen them rise to ninth, four points behind fifth-placed Tottenham and eight adrift of Chelsea in the final Champions League spot.

While the Toffees boss accepts, at this moment, the top four is out of reach he sees no reason why they cannot qualify for the Europa League.

“Of course to play in the Europa League could be a fantastic result for us for the next season but this is the target,” he added.

“Chelsea is too far in this moment, maybe in the next three or four games they could be more closer to us but the fact there are a lot of fantastic teams means our target has to be the Europa League.”

Everton’s late bid for European football could be boosted by the return of midfielder Andre Gomes ahead of schedule.

The Portugal international sustained an horrific injury against Tottenham on November 3 but has made such rapid progress there are plans in place for him to feature in a friendly to test his fitness ahead of the Toffees’ return to action after the mid-season break.

“We are going to organise a friendly game for us when we come back from the holidays and everything is OK with him,” said Ancelotti.

The Italian also hopes to have fellow midfielder Jean-Philippe Gbamin back before the end of the season after his second operation on a thigh problem which has sidelined him since August.

“The surgery went well and now he is doing individual treatment,” Ancelotti said.

“He needs eight weeks but with him we have to go slowly because the injury was big. Step-by-step we will see but we hope to have him (back) before the end of the season.”