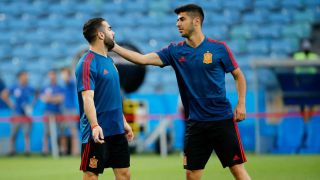 Fernando Hierro has confirmed right-back Dani Carvajal is back in contention for Spain ahead of Wednesday's meeting with Iran after recovering from a hamstring injury suffered in the Champions League final.

Carvajal has not played since the 3-1 win over Liverpool and initially was said to be a doubt for the entire World Cup.

That was soon ruled out and it was suggested he could return for Spain's final Group B match against Morocco, but Hierro said at a news conference on Tuesday that the full-back is available for selection after training for the past week.

While it remains to be seen if he will start or not, Hierro will surely feel tempted to select him following a shaky display from Nacho Fernandez at right-back against Portugal.

"Dani is doing well," Hierro told reporters in Kazan ahead of the Iran match. "He has been training with the rest of the team for nearly one week so has recovered very well.

"He has been working with doctors, physios and the medical staff. He is available for tomorrow [Wednesday]."

The main news from the presser being that Hierro trusts De Gea “entirely” and Dani Carvajal is fit for selection again after being back in training for a week June 19, 2018

David de Gea was one of the players to receive criticism on the back of the 3-3 draw with Portugal, as his error gifted Cristiano Ronaldo his second of the game.

But Hierro reiterated that the Manchester United goalkeeper is someone he has absolute faith in.

"I have 23 players with their own character and you can't treat them all the same," Hierro said.

"All I can say is De Gea will play. We trust him entirely. As we've been saying for a few years now, he's one of the two or three best goalkeepers in the world. He will play, we trust him."

Hierro will go up against Carlos Queiroz when Spain meet Iran and the pair have great mutual respect for each other, though the former Real Madrid defender downplayed the importance of their personal duel.

He said: "Well, in the end, those who compete are those who are on the pitch, they really compete. I know that Carlos really tried getting me [as a player], we have a very close relationship, we are close friends, but those playing are the players.

"We are only on the bench and we try to do as little as possible during the game. We just hope things happen the way we want."