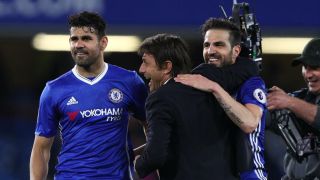 Ricardo Carvalho says Chelsea's revival this season has more to do with the squad living up to their true potential than the impact of coach Antonio Conte.

Last season, Chelsea mounted a dismal defence of the Premier League title and Jose Mourinho was sacked in December 2015, before the club eventually limped to a 10th-place finish under interim boss Guus Hiddink.

The Blues are on the cusp of regaining the championship in Conte's first season in charge, though.

Chelsea hold a seven-point lead over Tottenham with three games to go and will be champions if they beat West Brom on Friday.

Carvalho, who won three titles with Chelsea, recognised the work the Italian has done at Stamford Bridge, but believes the former Juventus coach has been fortunate the club's key players have rediscovered their best form.

Speaking to Omnisport, the Shanghai SIPG defender said: "The truth is that Chelsea have great players too. They were champions with Mourinho.

"The next year things did not go well, but the players are there. The players who have been champions, most are there.

"And so, of course, Conte has merit too because he changed the team's strategy a bit, but most of the players who were champions with Mourinho were there.

"So quality and talent were there. And this [season], fortunately, they are playing well and will manage to win again, at least they are well on the way."

Carvalho believes last season's disappointment was an anomaly and felt the true worth of the team has been restated.

"Yes, they are special players. You saw that in the first year with Mourinho," he added.

"The next year I do not know what happened. There are things that happen in isolation.

"But the truth is that quality is something that when we see them play, we see what makes the difference and gradually we see that they are special.

"They make the difference and they are important players. And it's important to care much about them because they are players that make a difference."