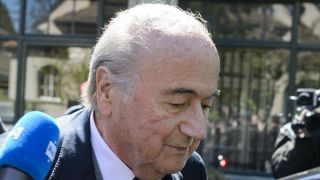 The Court of Arbitration for Sport (CAS) will hear Sepp Blatter's appeal against his six-year FIFA ban on August 25.

Blatter and his UEFA counterpart Michel Platini were suspended from all football-related activity by FIFA last December when the adjudicatory chamber of its Ethics Committee ruled a payment of two million Swiss francs, authorised by the Swiss to the former France captain, constituted multiple infringements of the FIFA Code of Ethics.

The FIFA Appeal Committee upheld the Ethics Committee's findings, although it reduced the initial eight-year suspensions to six in light of "strong mitigating factors" – namely Blatter and Platini's long history of service in football administration.

CAS heard Platini's appeal in May, when the body further reduced the Frenchman's ban to four years and changed his fine from CHF 80,000 to CHF 60,000, but maintained he was right to be punished, taking into account "the absence of any repentance" and the impact on FIFA's reputation.

According to CAS, its three-man panel had "unanimously determined" that Platini had obtained an "undue advantage" and that there had been "a conflict of interest" in breach of two FIFA Code of Ethics articles, saying it was "not convinced by the legitimacy" of the payment.

However, it still felt the suspension handed down was "too severe", prompting the reduction in his ban.

A statement released by the Lausanne-based body in March read: "Joseph S. Blatter has filed an appeal at the Court of Arbitration for Sport against the decision issued by the FIFA Appeal Committee on 16 February 2016 [the date of Blatter's appeal hearing].

"In his appeal to the CAS, Mr Blatter seeks the annulment of the decision taken by the FIFA Appeal Committee in which he was suspended from all football-related activities at national and international level for six years."

Outlining the process Blatter's appeal will take, the CAS statement added:  "A CAS arbitration procedure is in progress. First, the parties will exchange written submissions and a panel of three arbitrators will be constituted.

"The panel will then issue directions with respect to the holding of a hearing. Following the hearing, the Panel will deliberate and at a later date, it will issue a decision in the form of an Arbitral Award."