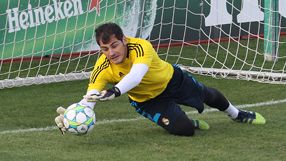 Mourinho's surprise decision to pick inexperienced reserve keeper Antonio Adan ahead of Casillas prompted speculation about possible rifts in the Real dressing room and they lost the match 3-2 to all but end their chances of defending their title.

With just under half the season played and ahead of their game at home to Real Sociedad on Sunday, Real are seven points behind second-placed Atletico Madrid and 16 adrift of arch-rivals Barcelona.

"I have to battle, fight and try to get my place back," Casillas told a news conference as the Real players met up for their first training session of 2013.

"That's the goal I have and I am hopeful the coach will choose me in the starting lineup on Sunday," added the Spain international.

"What is really important is that the 11 players the coach picks do their best. The institution and the club come before Casillas."

Mourinho's side have already dropped more points this season than during the whole of their successful 2011/12 campaign, losing four games and drawing three, while Barca have yet to lose in 17 matches.

The only match they failed to win was a 2-2 draw at home to Real in October and they will be seeking an 11th consecutive victory when they host city rivals Espanyol on Sunday.

Casillas acknowledged that Real's erratic form meant other teams in La Liga did not see them as such a daunting opponent this term and it was up to the players to win back that respect.

He denied there was any "tension" among the players and coaching staff.

"We can't throw in the towel. We have to keep going, run more, train more and hope the results come on the pitch," he said.

"Now, in 2013, we have to try to close the gap in the league while keeping in mind that the situation is difficult but not impossible."