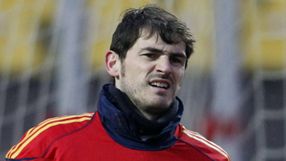 The Group I leaders won the match 3-1 to maintain their 100 percent record in qualifying, but had to adapt to a bumpy, muddy playing surface that had been covered with a large amount of sand in Kaunas's Darius and Girenas stadium.

"We've got three points on a pitch which is impossible to play on. The pitch is a disaster," Spain's World Cup winning goalkeeper told reporters.

"I think that sometimes we have to catch UEFA's attention, because this is lamentable. We go and play where they tell us to, but these football pitches don't help anyone to play this sport. It isn't only this one.

"UEFA has to come out and look at them and worry much more about pitches like this. They need to do much more, and not stay in their seats behind a desk telling us we have to wear pants and the same coloured socks.

"What they have to do is make sure the installations are in a condition to play football."

Spain midfielder Xavi put the visitors ahead with a deflected shot after 19 minutes and although Marius Stankevicius rattled them with a superb volley early in the second half, they were soon back in charge.

Tabas Kijanskas turned Juan Mata's cross into his own net after 70 minutes and with the hosts tiring towards the end of the match, Mata sped in to seal the points.