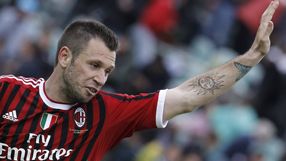 A 26th-minute goal in the forward's first start for six months helped the champions to a 4-1 win at Siena on Sunday and they stayed three points adrift of Juventus as the leaders walloped Novara 4-0.

Three games remain and second-placed Milan host mid-table Atalanta on Wednesday desperate for Juve, chasing their first Serie A title since a 2006 match-fixing demotion, to slip up at home to third from bottom Lecce.

Cassano, now likely to feature for Italy at Euro 2012 having proved his fitness, will be eager for another start in midweek and the medical staff say he is ready.

"He really has been very strong. He has not given up for one moment, he has come to the Milanello training ground and done exactly what he had to do. I didn't expect a goal immediately," club doctor Rodolfo Tavana told reporters.

"We wanted to make sure he could return to the pitch healthy and with no risks."

With the top two expected to win on Wednesday, focus will quickly turn to Sunday's derby between Milan and resurgent Inter who have rocketed up the league under new coach Andrea Stramaccioni and lie joint third with three teams.

Third place guarantees a Champions League qualifying place with fourth only worth a Europa League berth after Italy lost one of its slots to Germany.

Napoli, Udinese and Lazio are the other teams level on 55 points with Inter, 22 points behind Juve.

Italy uses head-to-head records rather than goal difference to determine positions at the end of the season and the scenario has added complications with Lazio hosting Inter on the last day of the campaign on May 13.

Before then Inter travel to improving Parma on Wednesday when Lazio welcome Siena and Udinese go to relegated Cesena. Napoli entertain Palermo on Tuesday.

Lazio will be without suspended defender Andre Dias and goalkeeper Federico Marchetti after bizarre scenes at the end of Sunday's 2-0 defeat at Udinese.

Visiting players heard a whistle in the crowd and thought the game was over, only for Udinese's Roberto Pereyra to score the second goal in injury time, leading to an unsavoury fracas and Dias's dismissal.

Marchetti was not sent off but Serie A said in a statement on Monday that he has been banned for four matches following video evidence which showed him pushing the referee.

At the foot of the table, second from bottom Novara will be relegated on Wednesday if they fail to win at fellow strugglers Fiorentina.