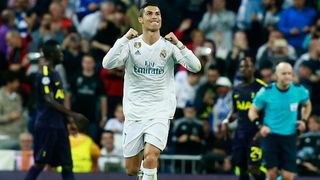 Edinson Cavani expects Cristiano Ronaldo to be at his most dangerous when Paris Saint-Germain face Real Madrid in the Champions League last 16.

The Portugal star struggled badly for form in domestic competition in the first half of the season, scoring just four goals in 15 LaLiga appearances.

The 33-year-old has shown signs of returning to his very best in 2018, though, hitting seven goals in his last three league matches, including a hat-trick in Saturday's 5-2 win over Real Sociedad.

Ronaldo has also remained consistent in Europe, netting nine goals in Madrid's six group games this term, and Cavani does not think he will struggle to make his mark when his PSG side visit the Santiago Bernabeu on Wednesday.

"Well, he has more experience than me and I'm sure he'll know how to get out of this situation," he told Marca when asked about Ronaldo's relative struggles.

"I believe that this won't make him uncomfortable, being the kind of forward that he is, with such self-belief.

"As a forward, you know these things happen. In one match, this motivation can come back."

Cavani himself has been in lethal form this term, with 28 goals in all competitions helping PSG to maintain their challenge for a clean sweep of trophies.

However, the Uruguay international does not anticipate their being many goals in the first leg of the Madrid tie.

"We're in a great moment, really, working well in every tournament. There's some stumbling, but that's logical. Football is like that," he said.

"We've signed important people and that adds up to a lot. It gives us confidence on the pitch. It motivates us for every challenge, including this Champions League, of course.

"It will be special to play against a Madrid with so much history. It makes you want to jump onto the pitch. But it'll be tough. We're facing an opponent with a lot of experience and players who can make the difference at any minute.

"I don't know if it's going to be a game with a lot of goals. I don't think so. The away leg, at least, is always tighter. They won't want us to score and the away team usually waits for the counter-attack.

"Sometimes it's useless to predict things because football is unpredictable. It'll be an even match and one where the defence works a lot."

PSG's knockout campaign ended in dramatic fashion in Spain last year, as they saw a 4-0 first-leg lead over Barcelona overturned by a spectacular 6-1 defeat at Camp Nou.

But Cavani believes his side have learned a lot from that last-16 exit, adding: "We lost an incredible match, but it was part of this club's path. We lost and learned. This PSG is a renewed one, with a lot of experience. It all adds up."