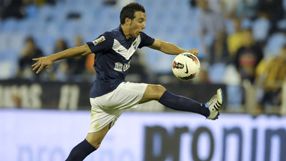 The Spain playmaker, a 20 million-euro purchase by the Qatari-owned club last year, thumped a long-range shot inside the far post after 67 minutes, cancelling out Nino's diving header just after the break.

The Costa del Sol side's only previous venture into Europe was when they reached the quarter-finals of the UEFA Cup, now known as the Europa League, in the 2002/03 campaign after winning the now defunct Intertoto Cup.

Osasuna matched their visitors in a pulsating encounter at the Reyno de Navarra, though Malaga hit the woodwork twice, and maintain an outside chance of a second tilt at the Champions League.

The Navarrans finished fourth under Javier Aguirre in 2006 but failed to reach the group stage the following season.

Osasuna are five points behind Malaga in eighth with 47 points, one short of the Europa League qualification slots.

Real Madrid top the standings with 88 points after a 2-1 win at Barcelona on Saturday which made them hot favourites to win a first league title in four years.