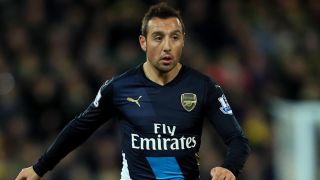 Arsenal manager Arsene Wenger confirmed midfielder Santi Cazorla could be sidelined for up to four months after rupturing a lateral collateral ligament in his knee.

Wenger said Cazorla opted to undergo surgery over the weekend after injuring himself during Arsenal's 1-1 draw at Norwich City on November 29.

Cazorla missed Saturday's 3-1 win over Sunderland and the 30-year-old is facing at least three months out.

"Santi wanted to have a chance to come back quickly so he didn't want to last too long for 25 opinions," Wenger said.

"He decided to go straight away. The guy said: 'Look, it's a clear case. It's a rupture of the external knee ligament.' And Santi said: 'OK, let's do it straight away.'

"It's not the season. It is at least three months out, maybe four."